Potato chip signs are a hit at baseball parks

I've been watching a lot of baseball, and it's making me hungry.

The Boston Red Sox are off to a great start in the 2007 season, and even with a great rotation, excellent bullpen, and lots of come-from-behind wins to keep things exciting, I couldn't help but notice the many potato chip ads in the background this season.

This year the Red Sox have new sponsorship deal with Wise, so Fenway Park has a new sign along right field behind the Pesky Pole.

The rival Yankees sport an Utz sign high up in right field at Yankee Stadium. This sign has been around for years, adding an element of deliciousness to the soon-to-be-demolished Bronx landmark.

The Metrodome in Minneapolis has a huge sign in center field for Old Dutch chips, declaring that the chips are "Everything a Chip Should Be!" 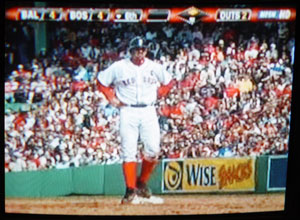 Red Sox catcher and captain Jason Varitek stands at first base in front of the new Wise sign. 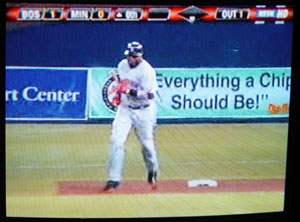 Old Dutch at the Metrodome

As David Ortiz rounds second base, you can see the huge Old Dutch sign in center field. 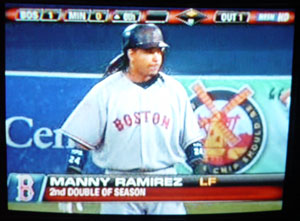 Manny and the Windmill

A closer look at the sign behind Red Sox left fielder Manny Ramirez reveals the Old Dutch windmill with the same slogan "Everything a Chip Should Be" around it. 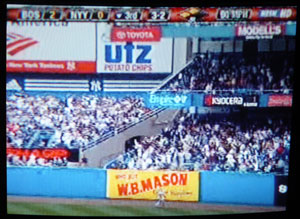 Utz in the Bronx

As a Doug Mientkiewicz home run goes over Eric Hinske's head in right field at Yankee Stadium, it's hard not to notice the Utz sign among the many billboards.