I'm ready to eat an MRE!

06.18.2015
My friend Blake, who has been deployed overseas at least his share of times, gave me a couple of military MREs to try out from a Chief Snacks Officer's perspective. Which is to say, preparing and eating them far from the battlefield, in my kitchen.

If you're not familiar with MRE, it stands for Meal, Read-to-Eat. The U.S. military uses them to provide a complete, shelf-stable hot meal in a convenient package, in places where they can't provide normal food preparation facilities.

The MRE name seems like a bit of a misnomer, as it was actually not quite ready to eat, but the package did include everything (except water) needed to prepare the meal and even to warm it up with no tools or kitchen facilities. 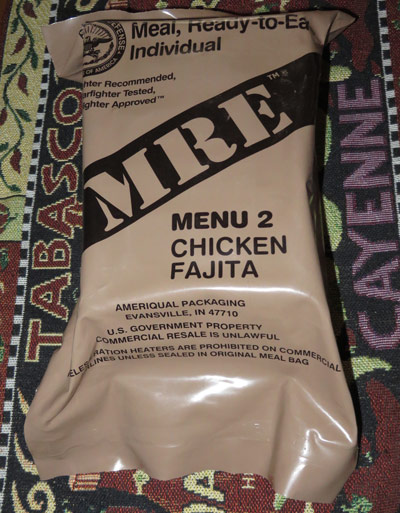 There are several different MREs available. Here's the main package of the Menu 2 Chicken Fajita MRE, posing on my favorite placemat.

The top of the package was labeled as a "peelable seal" but it took quite a lot of effort to pull it open. The package was made from some very tough plastic — there's little chance of this seal being breached accidentally. 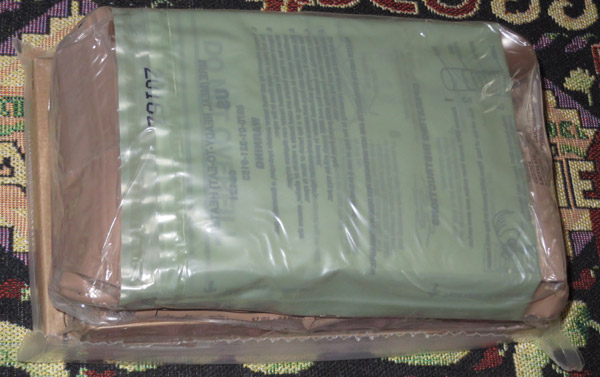 Once inside, I found that all of the contents were again sealed within a single clear plastic bag. 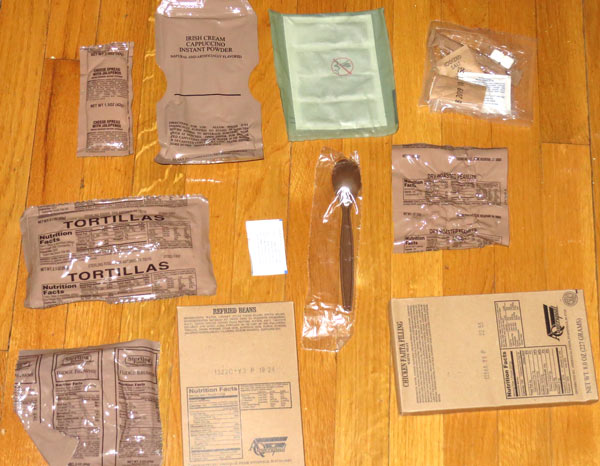 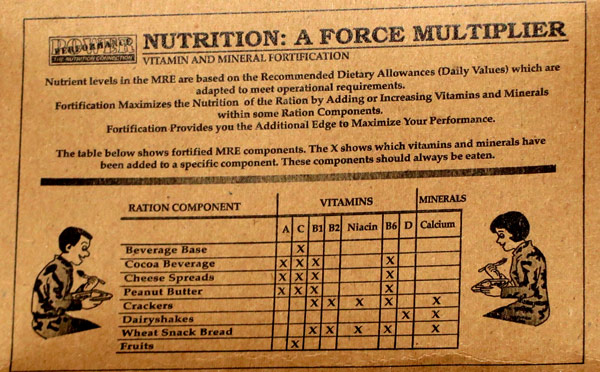 The back of the box for the main entree included some nutritional information and motivation. I loved how the two soldiers had such big smiles on their faces as they enjoyed their MREs. 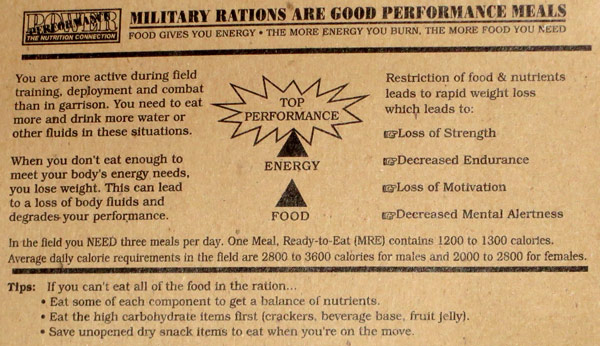 The other box provided further instructions and motivation, including tips on what to eat for maximum performance if you can't eat everything. 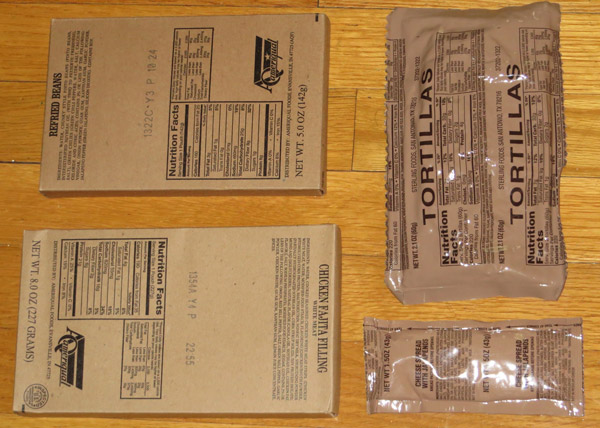 Here's a closer look at just the packages that come together to form the main Chicken Fajitas entree. The Chicken Fajita Filing and Refried Beans boxes each contained flexible pouches inside, holding the actual food. The Cheese Spread with Jalapeños was a bit bigger than a standard ketchup packet.

This bag (now unfolded from its initial state in the view of everything above) was the key to warming up the entrée. It's just a fancy plastic bag with some instructions on the outside and a heating pack on the inside. The short version of the instructions is that you take a sealed food package out of its box, put it inside the heating bag (where the heating pack already is), add just a little bit of water, fold the top of the bag to seal it, and the put the bag back inside the box. The water activates the heater.

It came with a few warnings.

The instructions said to fill to a level between the two lines near the bottom of the bag, after slipping the food pouch into the bag. This sounded like something that was easy to screw up. The lines were very close to the bottom and close together, plus much of the space down there was taken up by the heating pack and the food pack, so I didn't know how much water to pour in. (The biggest words on the heater bag were, "DO NOT OVERFILL"!) After holding it under a faucet and putting just a little water in, I did indeed overfill it, but I spilled out the extra and don't believe I did any damage.

This was my favorite part of the instructions. Once everything is in the box, you're supposed to place it on an incline. How do you keep it at an angle? Lean it against a "rock or something"!

I didn't have any rocks in my kitchen, so I leaned against the cap of my orange juice machine.

The heater instructions said to leave it in the box for 10 to 15 minutes to let the food heat up. After a few minutes, I checked and found that it was indeed getting quite hot. It was also making some whooshing/whistling noises.

Initially, I had put only the Chicken Fajita packet into the heating bag, but it was sufficiently hot that I figured it could handle the Refried Beans as well, so I added that and resealed the bag. 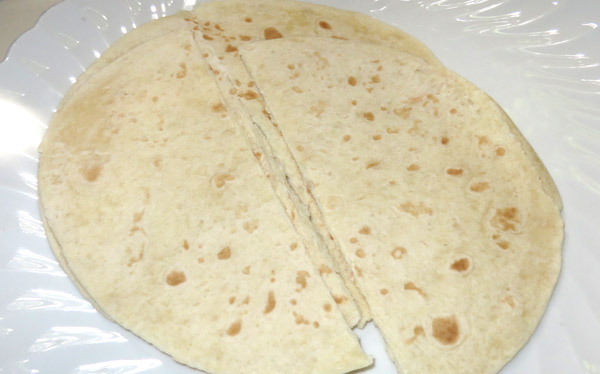 While waiting for the heater, I figured I'd check out the tortillas. I opened the package to find that there were two tortillas, each folded in half, and unfortunately both of them had split along the fold, so really there were four half-circles. This ended up being a bit of a problem because it was much harder to hold lots of filling with half-tortillas than full ones, even if there were twice as many.

But on the plus side, I decided to munch on a bit of tortilla, and it was really quite flavorful.

At this point I was getting hungry and had to wait for the heater, so I decided to open up the Dry Roasted Peanuts to snack on. They were really good. Check out the full review of the peanuts.

I took the packages of fajitas and refried beans out of the heater, opened up them, and squeezed out some contents from each onto a tortilla. Then I added some of the jalapeno cheese sauce. Then I realized I probably should have heated the cheese too, but too late, so I'd have to deal with the congealed-looking sauce.

OK, it looks dreadful. But this isn't a restaurant, it's an MRE, so I'll judge it on taste.

The fajitas filling did not taste like fajitas; it tasted more like beef stew (except with chicken). It was decent, certainly nothing great, but not terrible by any means. The fact that it was nothing like fajitas made me wonder whether maybe they included the wrong filling, since another MRE that I was given actually promised to include Chicken Stew. However, I double-checked and found that both the box and the pouch were clearly labeled as Chicken Fajita.

As expected, the half-tortillas didn't work very well for holding the chicken, beans and cheese (though, again, the tortillas themselves tasted excellent). So after eating two of them, I just put everything else into a bowl and ate it with a fork. Again, this is not going to win any awards for presentation.

Time for dessert! Not a good brownie by any means, but not disgusting or anything. Good for a slight chocolate rush. (See the brownie review for more.)