A closer look at Tastes of America 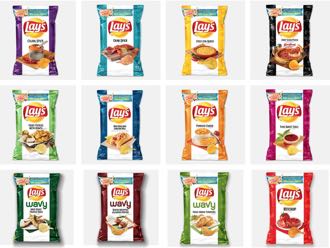 For years, Lay's has been doing an annual rollout of limited-edition flavors, usually three or four of them, with a vote to determine which one won't be so limited. There have been some weird ones in the Do Us A Flavor promotions, including Cappuccino in 2014, Chicken & Waffles in 2013 and Everything Bagel with Cream Cheese in 2017.

This year, Lay's Tastes of America is apparently replacing Do Us A Flavor, and there are 8 or 12 flavors, depending on how you count, and no vote planned. More flavors sounds great to me, but after checking out the website and the news about this, some major quirks have become clear.

The most significant one is that they're not only theming the flavors around regions, but also distributing them exclusively by region. (This is according to the Thrillist and USA Today. I could not find anything on laystastesofamerica.com that states this. Frito-Lay's press release page has no mention of this promotion at all, with the most recent release touting those scary bags with truncated faces on the front.) For example, the flavor sure to get the biggest buzz, New England Lobster Roll, will be only available in stores relatively near where you can get a lobster roll anyway. This seems to almost entirely defeat the point of having so many new flavors. I can see the novelty of having a new potato chip in a flavor that you're already familiar with; eating such things was the main impetus of creating Taquitos.net, more than 1700 potato chips ago. But do the marketing folks at Lay's really think that people's flavor interests are so limited that they wouldn't want to try the other flavors, or that the only interest would be the in the flavor that Lay's has (somewhat arbitrarily) tied to a person's own region?

What you can do to get the other flavors, apparently, is buy them online. Well, eight of the 12 are available online anyway — most parts of the website show only eight flavors, but one page expands it to 12, adding four other flavors that will evidently be only in stores. (Those other news reports neglected to mention the other four flavors.) And for some reason, they're restricting people to buying five bags at a time. (It doesn't say this anywhere that I could find, but it became evident when adding a fifth bag to the cart, which caused a message "Cart limit reached. Remove items in cart to continue shopping.") Why would they possibly do this? I can understand having some upper limit, but why five? Did it not occur to them that some people will want to try every flavor they sell? Were they unable to source boxes that can hold eight bags?

I'm going to go out on a limb here and say that most people don't buy potato chips online, and they don't travel around the country looking for different chip flavors. (I do both of those things, but such is the life of a Chief Snacks Officer.) The end result is that Do Us A Flavor gave most snackers three or four flavors to try, while this promotion gives them just one.

Now, lets get to the flavors. Based strictly on the names, some of these flavors are barely new flavors, and some aren't new flavors at all. Crab Spice was seen in 2007 as Crab Spice Seasoning and just a month ago as Chesapeake Bay Crab Spice. Cajun Spice sounds a lot like 2011's Cajun Herb & Spice. Chile con Queso rings a bell as Southwestern Queso from early this year. Deep Dish Pizza, specifically Giordano's pizza, could well resemble Toronto College Street Pizza from Tastes of Canada in 2003. The other four, New England Lobster Roll, Pimento Cheese, Fried Pickles with Ranch and Thai Sweet Chili, sound promising as actual new flavors for Lay's (though they did already have a Lay's Stax in Sweet Thai Chili).

As for the in-store-only (but only in some unspecified places) ones: Two of the four were previous Do Us A Flavor items: West Coast Truffle Fries and Fried Green Tomato. Ketchup has long been done by Lay's in Canada. And finally, Bacon Wrapped Jalapeño Popper sounds entirely original, at least for Lay's, and I want to eat some right now! So why the lack of online ordering and unspecified region for this one?

I placed a "preorder" yesterday (July 18) for five bags, and after encountering the shopping cart restriction, I read the fine print at the bottom to find no explanation of that limit, but I did find more strangeness. It said, "Products will not ship until after the promotion period has started on July 30th 2018. Products will ship within 10 business days after the order has been placed." That's contradictory for an order placed on the 18th or 19th. They also charged my credit card for the full amount on July 18. It just seems like Frito-Lay has no clue here, as if they have no experience selling online (which might well actually be the case).

While I'm nitpicking, one more thing: They haven't configured their web server quite right, so if you go to https://laystastesofamerica.com (without www.), it brings up a defaut page for "Bitnami Nginx 1.10.3-0 in the Cloud." Going with the www's works correctly. Also, going to lays.com redirects you https://www.laystastesofamerica.com, as this promotion has apparently subsumed the regular Lay's website — which seems strange for a promotion that makes just one (potentially) new flavor available for most folks.

Update 08.08.2018: Still no sign of the chips I bought online. So I sent an email to the address that they provided.

On July 18, I placed an online pre-order for five bags of Lay's Tastes of America chips (identified in the confirmation email as RRD-xxxx).

According to the order status page linked from the confirmation email, "Products will not ship until after the promotion period has started on July 30th 2018. Products will ship within 10 business days after the order has been placed." However, it has now been 21 days since the order was placed, and the order status page still says, "Your order is confirmed We've accepted your order, and we're getting it ready. Come back to this page for updates on your order status." So it would appear that the chips have not even shipped at this point, far beyond the time frame that was indicated.

When can I expect to receive my Tastes of America potato chips? I'm eager to try the new Lay's flavors, so I hope you're able to provide an accurate status.

They very quickly got back to me. Apparently Frito-Lay has outsourced fulfillment (or lack of it) to a firm called The Marketing Arm.

Pre-orders are likely to ship on Wednesday (8/8/18) with an estimated delivery of Tuesday(8/14/18)/Wednesday (8/15/18) of next week. You will receive a tracking number for your order when the order has been shipped.

As of midnight on 8/8, I had not received any tracking number from them. The status page still says, "We've accepted your order, and we're getting it ready. Come back to this page for updates on your order status."

Update 08.09.2018: As of midnight on 8/9, I had not received any tracking number from them. The status page still says, "We've accepted your order, and we're getting it ready. Come back to this page for updates on your order status."

Update 08.15.2018: It's been a week since I'd been told that the chips were "likely to ship" that day, and today is the second of the two days given for "estimated delivery" — but neither of those things has actually happened. So I emailed them again.

It's been a full week past when you said the pre-orders "are likely to ship on Wednesday (8/8/18)." (It's also been 16 days since pre-orders were originally supposed to ship, and 28 days since my order was placed.) According to the order status page, it still has not shipped, as the page still says, "Your order is confirmed We've accepted your order, and we're getting it ready. Come back to this page for updates on your order status."

Any update on when the potato chips will actually be shipped?

They quickly responded yet again, but provided little useful information, passing the buck to ... they didn't say who. What's a pre-order again?

We apologize for the delay on your pre-order, as we understand these orders are going out later than anticipated. Our fulfillment team is working hard to get these orders out as soon as possible.

Our team does not have direct control over this process (we wish we did!). There were some issues regarding the system that generates shipping information to send the orders. This has been fixed and we are now packing your order to send out as soon as possible. You will receive a tracking number for your order when the order has been shipped.

Update 08.16.2018: Finally, a sign of some progress! I got an email at 5:34 p.m. providing a tracking number. But it sure seems like these folks don't know what they're doing, because:

Update 08.17.2018: Got another email at 10:49 this morning, this time from support@laystastesofamerica.com, with the subject, "A shipment from order RRD-xxxx is on the way." The email did not contain the tracking number, but clicking through from the "View your order" button brought me to the order status page, which did show the tracking number. (Clicking on that revealed the box has made its way to Mesquite, Texas.) However, above it, the page still showed the same status message:

Your shipment is confirmed
We've accepted your order, and we're getting it ready. Come back to this page for updates on your shipment status.

Update 08.18.2018: The package departed Mesquite, Texas, yesterday, and thankfully, they've updated that order status page with a more useful message (though the math doesn't quite work out).

Your shipment is on the way
Come back to this page for updates on your shipment status. You should receive your package in the next 3 days. Estimated delivery date: August 22

Update 08.21.2018: Got the chips! The package arrived today, a day ahead of UPS's initial estimate. They even sent an email to indicate that it had been delivered — and it was from laystastesofamerica.com, not UPS, so another plus. Thus, the collection has expanded to include Deep Dish Pizza, Pimento Cheese, Fried Pickle with Ranch and Thai Sweet Chili.