Can the Chipmaster make his own chip? 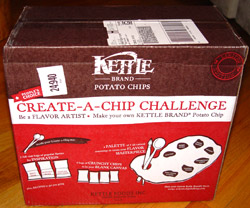 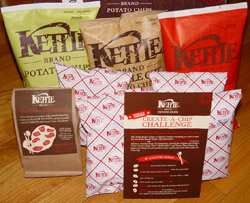 I've eaten and reviewed a lot of potato chips, so I know what I like and what I don't like. But I'm just a critic and not much of a cook. I have always assumed that if I ever tried to make my own chips, the results would be terrible.

Can I make a good chip? I got to find out — sort of — by trying the Create-A-Chip Challenge from Kettle Chips.

Thankfully, the chips came pre-cooked (in four small bags of unflavored, unsalted chips) so all that I had to do was pick my own flavorings.

The instructions said to pick seasonings from among those provided or from your own kitchen (noting that "a little goes a long way"), then sprinkle them into a bag (each contained about a dozen chips) and shake it up a lot.

For my first creation, I picked Cheddar, Carmelized Onion and Sweet Chili. I ripped open the three seasoning packets, poured some of each into a bag of chips, folded over the top, and then shook, shook, shook and shook. The results were surprisingly tasty, though there wasn't much of a chili kick. So after eating two chips, I added more chili and shook again. It was pretty good. Probably not as good as the typical Kettle Chips flavor, but considering that I made it, not bad at all.

For the second blank slate bag, I decided to try combining Roasted Tomato with Vinegar. This time, I did it one step at a time, first pouring some of the tomato seasoning into the bag and shaking. I tried one of those chips and it didn't seem tomatoey enough, so I added more. That was better. Then I added a some the Vinegar seasoning (it was bright white, so it seemed like maybe I poured too much) and shook. Very, very tasty, a really nice combination. Then I really pushed my luck and said, hey, what if I also add Carmelized Onion and Cheddar? So I poured on some of those two and shook again. It was actually quite flavorful, but not as good of a combination as the vinegar and tomato alone. However, the seasoning was really heavily caked onto some of the chips at this point, so I probably overdid it.

The third time around, I figured, let's try combining a whole bunch of seasoning, because I usually like chips that are loaded with multiple flavors, but not add too much of each kind, to avoid the overseasoning issue. So I poured in just a bit of Cheddar, Roasted Tomato, Vinegar, Sour Cream & Chive and Lemon Butter. As I poured in the Lemon Butter, I thought, "What the heck is Lemon Butter, and why am I putting it on my chips?" After I shook it up and tasted, my fear turned to true disappointment, as the potentially good combination of tastes was dominated by a lemony taste that just didn't belong there. No compliments to the chef on this one! (As a last-ditch effort to salvage this recipe, I added some Sweet Chili, hoping that might offset the lemon. That didn't help — still too lemony.)

Three bags in one sitting was plenty for me, so I'm saving the last chip bag, and I'm going to store the opened seasonings in a Ziploc. Maybe I've got one really good recipe still to come!