Bringing the 11 herbs and spices to the chicken strip 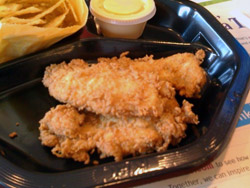 KFC's Original Recipe strips are tastier than they look.

I've always been a big fan of the "Original Recipe" style of Kentucky Fried Chicken (now known as KFC to try to make us forget the word "fried"). It brings back memories of going to my grandmother's house in the summers during the '70s and having a big bucket of fried chicken, cole slaw and mashed potatoes. That was their only chicken recipe until the mid-'70s when the Colonel added "extra crispy" to the menu. I showed no loyalty and quickly jumped to that option. After all, extra batter meant extra grease. Yummmmm.

So when KFC came out with new versions of its chicken menu items, including the Popcorn Chicken, KFC Snacker Sandwich and the KFC Crispy Strips, they used the "extra crispy" batter / formula, leaving little old Original Recipe relegated to the big bucket. Until now.

KFC recently started selling "Original Recipe" flavor as an option for the Crispy Chicken Strips, and of course I had to run out and try some. After paying $3.79 for three strips, I got my plate of strips and was ready to bring back memories of my youth. (I chose to forgo the combo meal because, quite honestly, the potato wedges at KFC are awful — they should go back to shoestring fries.)

I was anticipating just a bit that they would taste like Chick-fil-a's nuggets, in that they are more lightly breaded. In this case, this was true, the light breading of the original recipe brought out more of the chicken flavor than the extra crispy style does. The spices also had a mild after-kick to them, which was pretty cool, as I don't normally expect that with the chicken strips. These were just as advertised — if you like the original recipe flavor, then have some boneless strips and you'll enjoy them without worrying about bones.

There was another bonus: These tasted just fine without the need for adding a dipping sauce. With popcorn chicken and the Crispy Strips (extra crispy), I always felt obligated to get some sauce, but the Original Recipe held its own without the barbecue, honey mustard or ranch sauce. In fact, the strips were big enough where you could get a knife and fork and pretend that you're eating a chicken breast.

So kudos are in order to KFC for bringing this flavor to customers. Knowing my luck, however, they won't be around for long.