Doubling Down on this KFC sandwich

Who needs bread when you've got fried chicken? 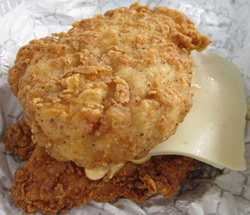 You've probably heard about KFC's Double Down sandwich by now: Two strips of bacon and two slices of Jack cheese (two different kinds!) enclosed between two slabs of fried chicken. Some special sauce too. No bread.

Various self-appointed food police have condemned KFC for even offering this sandwich. But apparently these things are selling like hotcakes. (Side note: Does anyone still eat hotcakes? And even if some obscure people do, are they really selling like hotcakes anymore? Perhaps it's time to retire this phrase and replace it with "selling like KFC Double Down sandwiches.")

When I heard about Double Down, it wasn't exactly my top priority in the world to eat one, but it did sound tasty. I finally got around to eating one last weekend

The major disclaimer in my evaluation of the Double Down is that I had the sandwich without the bacon. This was not because I didn't want bacon — indeed, I believe that everything's better with bacon! However, when I ordered the Double Down, the cashier informed me that they were out of bacon and asked if I still wanted it. This was a disturbing turn of events, of course, but once I had walked into the KFC with eating a Double Down on my brain, there was no way that I was going to just leave without eating something of the sort, bacon or no bacon.

A few minutes later I got my Double Down. Mine came in a regular sandwich wrapper, not the sleeve featured in the KFC ads. I opened the wrapper to find that the sandwich was smaller and more innocent looking than I had expected (based on all of the naysayers declaring this monstrous, high-calorie sandwich to be the end of civilization). It looked like a perfectly reasonable size for a meal. After shooting the picture above, I picked up the sandwich and took a bite. It was hot, crisp and fresh. The mix of cheese, chicken and sauce was quite tasty. I was pretty impressed. But by around the second bite, I realized that the fried chicken was sufficiently hot that it was scorching my fingers. For the remainder of the eating, I held the sandwich by the wrapper to avoid burns.