A Revolution in Brownies

In today's tough economic times, can you justify spending $35 on a brownie pan?

Yes, you can — if it's the Edge Brownie Pan from Baker's Edge.

I first spied this pan years ago in SkyMall, but I resisted it. $35 for a brownie pan? Even though it had the added advantage of canals that ensured each brownie had edges, the price seemed too steep.

But the pan kept coming up in conversation via my brownie-edge-loving husband. With Valentine's Day approaching and no gift-giving ideas, I decided to give in and give it a try.

Once I found the Edge Brownie Pan on Amazon

and saw it earned 5 stars with more than 100 customer reviews, I felt better about spending the money.

Soon it arrived. After gift-giving, it was time to break out this pan and see whether it would live up to the hype. Just taking it out of the box, I was impressed. Made of heavy-gauge cast aluminum, the pan had a nice heft to it. It was solid and well-built, not a thin piece of junk.

I prepared a simple box mix and poured it in the pan, evenly among all the continuous canals. After about a half-hour, out came perfectly cooked brownies - chewy on the inside with crispy edges. After letting them cool, I used the thin plastic spatula (supplied with the pan) to cut out and remove a brownie. The brownie simply lifted out with no effort.

Clean-up was even better as absolutely nothing sticks to this pan.

If you love brownies or know someone who does, consider the Edge Brownie Pan from Baker's Edge. It is worth the money.      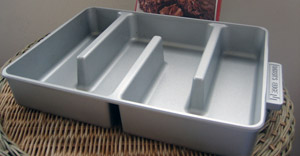 I was impressed by the Edge Brownie Pan's sturdy construction. 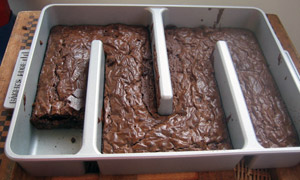 Even with the serpentine shape, it was easy to cut one brownie out of the tray. 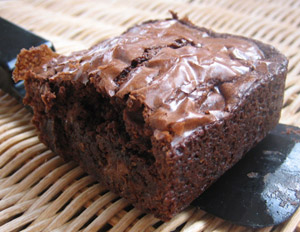 Bottom line is: How do the brownies taste? They tasted like Edge Brownie Pan is a winner.