Doritos gets a new logo — again!

A new image for the most popular tortilla chip brand

With so much excitement already around the Doritos brand, from reaching 100 varieties reviewed by Taquitos.net to their Doritos-flavored tacos at Taco Bell and even Super Bowl ads, I was surprised to spot a brand-new Doritos logo on a bag of the Jacked Ranch Dipped Hot Wings flavor a few weeks back. Since then, the new look has also made its appearance on Nacho Cheese and Cool Ranch.

It's the first major redesign of the Doritos bags sold in the USA since 2006. At the time, I didn't like that design much, as it just seemed like they were making it all futuristic and de-emphasizing the triangle while adding a weird bright squiggly thing at the top for no obvious reason. I'm sufficiently accustomed to the 2006 design by now that the pre-2006 look really does seem dated. And in retrospect, I guess the squiggly thing was supposed to be a fancier version of the triangle and squiggle on the prior bag. Now, the squiggle's gone entirely, and the triangle has definitely returned.

The 2006 logo made its debut concurrent with the re-renaming of some flavors. Nacho Cheesier (née Nacho Cheese) became Nacho Cheese once again, with similar rollbacks of the relative adjectives in the Cooler Ranch and Spicier Nacho flavors. 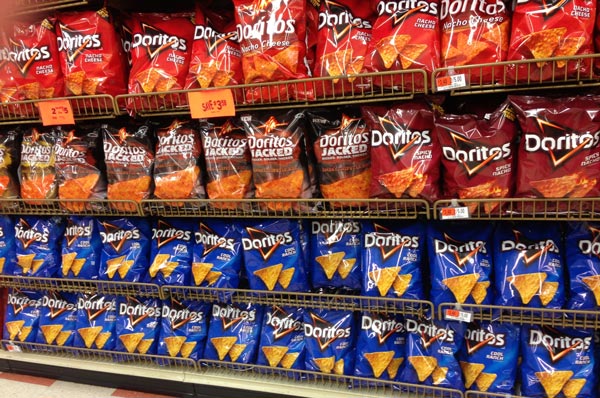 As of this writing, there's a mix of new and old logos on the Doritos bags in local stores. So it's a special time in the chip aisle during the transition — you can choose either bag. And if you don't like the new look, it's probably your last chance to hoard the old ones. (I still have a have an unopened bag of the Cooler Ranch ones from 2006.)

I do like the new logo quite a lot. The return of the large triangle is welcome, and having the triangle pierce both of the O's is a nice touch. I also like that they kept the triangular dot on the i, while giving the stem of the letter a tapered top so that the dot isn't just floating out there in space.

Doritos has a much longer history than just the three looks above. By traveling back in time — or across the ocean — there are even more versions to be found. 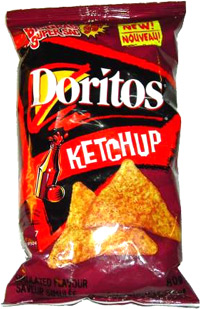 This particular bag of Ketchup Doritos is from Canada (hence the French on the bag) but it's the same logo used on American Doritos earlier in the 2000s, before the pre-2006 logo above. The triangle and squiggle are the same, but the typeface has serifs. I like the wacky font that they used for the word "Ketchup" and some other flavors. 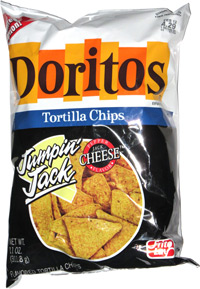 This bag of Jumpin' Jack is a recent one from 2012, though it's a revival of a look from the 1970s and 80s. It's been sighted on store shelves as recently as this week. 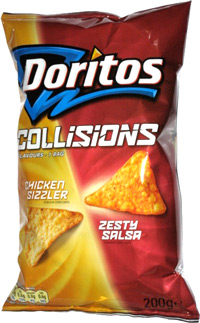 This bag of Collisions Chicken Sizzler/Zesty Salsa was purchased in London in 2009. At first glance, it seems to be the same as that pre-2006 USA design, but it's actually different, with a different typeface, different style of squiggle and no large triangle. It's only now being phased out in the UK in favor of the 2013 version. This logo has never made its way onto American shores, but the same logo is also found in Japan, with this Taco flavor we found in 2011.

What do you think of the new logo? Which of the old ones was your favorite? Please share your thoughts below!