I spotted a huge sign advertising Cold Cow Ice Cream Milk Shakes outside a convenience store that I'd passed by many times but never entered. (Incidentally, it's across the street from where the Fluff festival is held each year.) This raised the question: Do they really have an ice cream counter in there? It didn't seem like that kind of place, but then again, what do I know? I rarely turn down an opportunity for a frappe (that's what we call them in Boston), so I was definitely ready to learn the truth.

As it turned out, they did not have an ice cream counter. What they did have was a special display with a freezer and microwave dedicated to storing and preparing Cold Cow Milk Shakes. 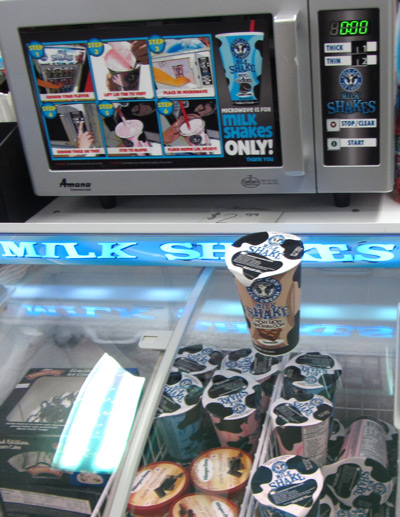 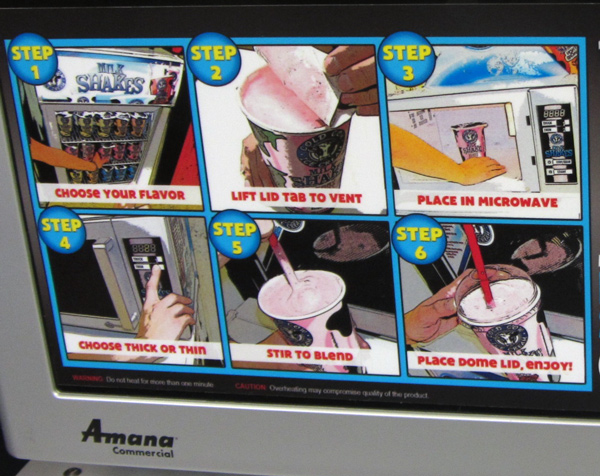 This wasn't your standard microwave, as you couldn't directly enter the cooking time, but instead it only had buttons for "thick" and "thin" cooking cycles. (And no "popcorn" button either!) I put the cup inside, hit the "thick" button, and it activated a 30-second countdown. When I opened the door and peeled the lid, the ice cream looked like it had barely softened at all. The red straws provided were fairly rigid, as they were intended for stirring, but even with some softer areas near the sides, this ice cream would not stir. So I put it back in for a second "thick" cycle. That got it to the point of being stirrable with effort — and stirring was quite necessary, since the microwave-induced melting was quite uneven.

A closer look at the instructions on the cup after the fact indicated that "thick" calls for a 30-second run and "thin" means 40 seconds. It also warns, rather sternly, "DO NOT HEAT FOR MORE THAN 1 MINUTE." 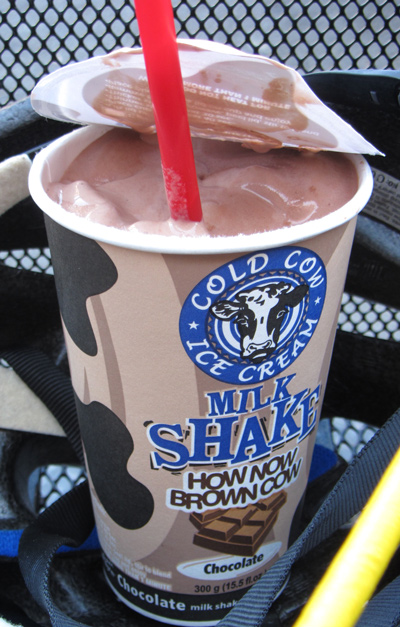 It was a very good milkshake. Very rich and milky chocolate. The perfect temperature and timing didn't quite happen by strictly following the instructions, but since the ultimate objective was to provide the semi-melted experience that a frappe (sorry, milkshake) provides without the need for ice cream personnel, supplies and equipment, they succeeded quite well. At $2.99, it wasn't quite cheap, but it did cost less than your typical custom-prepared milkshake, so still a good value.