Fire up the stove for three new products from Chester Cheetah

With 111 different kinds of Cheetos reviewed, the brand has become nearly synonymous with tasty cheese snacks. We're of course hoping for even more flavors to emerge, but meanwhile, the folks at Frito-Lay have found another way to grow the Empire of Chester Cheetah — Cheetos-branded Mac'n Cheese. (You need to cook it yourself, so it's not to be confused with the Mac 'n Cheetos that Burger King cooks for you.) 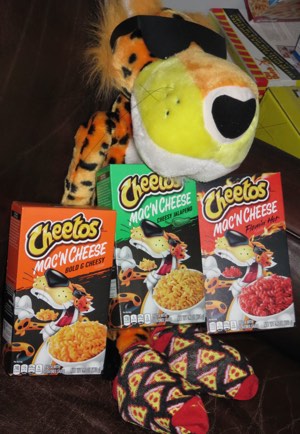 They're being offered in three different flavors: Bold 'n Cheesy, Cheesy Jalapeño and Flamin' Hot, posing here with their father, Chester Cheetah. Word is that they're exclusive to Walmart, at least initially. The boxes had the same shape and size as your typical boxes of mac & cheese from Kraft and everyone else. They were nicely designed, incorporating the familiar Cheetos branding, clearly distinguishing the three flavors, and showing Chester's enthusiasm for eating the final product. 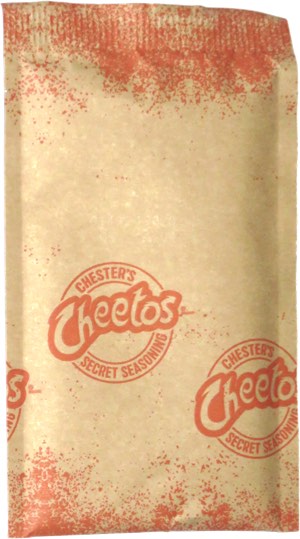 Inside each box was a bunch of rotini, ready to be poured into boiling water, plus a seasoning packet that looked like this. As in, it looked exactly like this, regardless of which flavor. I liked the understated design and "Chester's Secret Seasoning" moniker, but a different color per flavor or just spelling out the flavor would have been nice. I understand the secret recipe is guarded by Chester himself at Fort Knox, but I didn't think the secret was which box the packet belongs in. (The are some numbers on the back that presumably make them not entirely identical.) 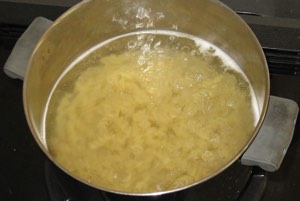 Believe it or not, we do make occasional use of the stove or oven at Taquitos.net headquarters for complex cooking operations. This is the rotini being boiled for 7 minutes. 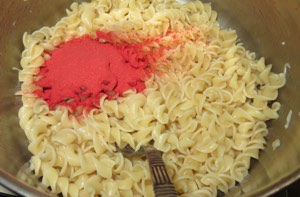 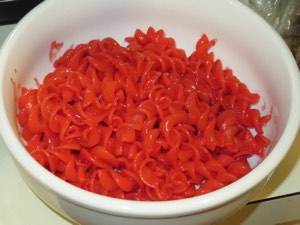 Mix it up for a while, transfer to a bowl, and it's ready to eat. About 10 minutes from start to finish (plus however long it took to boil the water). It's good, plenty cheesy with a lots of nice tasty heat. It didn't taste the same as Flamin' Hot Cheetos, but no complaints about the flavor. 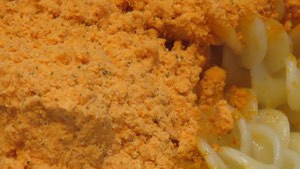 As for the other flavors, I'm figuring the Bold & Cheesy flavor was supposed to correspond to original Cheetos (either the Crunchy or Puffs versions), but with the name not actually matching — the bags say "Dangerously Cheesy," not "Bold & Cheesy" — that might not be a reasonable expectation. The powder (before mixing) looked just incredible, with a nuclear-bright orange color, so bright that my photography equipment could not do it justice to show just how bright it was. (This picture is the Cheesy Jalapeno powder, a much ligher shade of orange than Bold & Cheesy, with a light smattering of small green bits.) The taste was very good, with an essence of the Cheetos cheese flavor, but definitely not an exact match, just as suspected.

The Cheesy Jalapeño also didn't correspond to a real Cheetos flavor, but it sounded close enough to Crunchy Cheddar Jalapeño that I figured that was probably the intention. I bought a bag of those to remind myself of the flavor, and they were seriously very tasty, about as good as Cheetos get. In the end, the Mac'n Cheese version tasted good, with lots of cheese and a nice mild heat, but it wasn't a flavor match for, nor as much of a world-class standout as, the Cheddar Jalapeño. 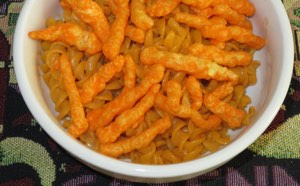 Finally, the back of each box had a "Cheetos Mac Hack" suggestion of combining the completed Mac 'n Cheese with actual Cheetos — so I did just that. This is the Cheesy Jalapeño version, topped with a whole bag of original Crunchy Cheetos. The mix of tastes and textures was indeed a winner!