Squirrel-flavored crisps? Only in Britain 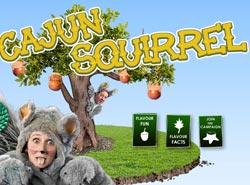 I always knew that the flavor choices for potato chips (or crisps) were more daring in other countries than here in the U.S. — the market here can't even support a bacon-flavored chip for any length of time. But I never saw any that pushed the flavor envelope quite so far as in this recent story about Britain's leading crisp maker Walkers announcing the results of a contest that let the public pick some new crisp flavors.

According to the article, the Cajun Squirrel flavor was suggested by Martyn Wright, 26, who said he wanted to enter the contest when he saw squirrel on a restaurant menu.

All of the crisps will be sold until May, and then a vote will decide which flavor (or flavour, if you're from the U.K.) gets to stay on sale permanently. The creator of the winning flavor gets 50,000 pounds, plus 1 percent of future sales.