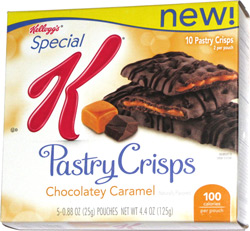 Taste test: This flavor of Special K Pastry Crisps jumped out at us initially because it was such a departure from the more breakfasty initial flavors we found, Brown Sugar Cinnamon and Strawberry. The form factor was the same as those other kinds, but the look was quite different, as each bar was made of chocolate cookie material, with some wiggles of milk chocolate across the top and a layer of caramel on the inside.

We crunched in to find that the caramel layer was thin, but then again, the whole thing was thin. The taste was good, with a mix of chocolate and caramel, not overly sweet, and it went well on its own or with cold milk. However, eating a bar didn't seem all that filling. Thankfully, each 100-calorie packet contained two bars. Eating two bars was twice as filling as eating one, but it still didn't seem filling enough. There were five of the 100-calorie packs in the box, so you could always eat more, but this might be best if you're only slightly hungry; if you're very hungry, get something else.

Smell test: Good caramel smell, with a hint of chocolate too. Nice.

From the package: “Indulge your cravings with the rich taste of caramel in a delightfully crispy, chocolatey pastry. Enjoy two Special K® Pastry Crisps for 100 calories ... and say yes to your sweet tooth.” ... “Try all 7 flavors”