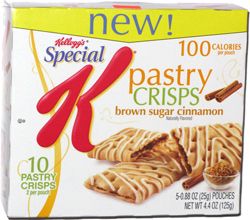 Taste test: Much like the strawberry version, these "pastry crisps" were shaped like energy bars but made from the same basic materials as Pop-Tarts.

Whereas Pop-Tarts come two to a packet and you could easily get by eating just one of the two (sometimes raising the question of what to do with the other one), these came two to a packet (stacked on top of each other, much like Pop-Tarts) but one packet didn't seem like nearly enough food. They tasted a lot like cinnamon Pop-Tarts, but they felt much lighter. That's lighter in several senses: holding a packet of two bars in the hand, it felt like it weighed almost nothing; and after eating both bars and enjoying the taste, I did not feel very filled and needed to open another pack. Why so un-filling? The pastry crust was thinner than Pop-Tarts, the filling much less substantial, the frosting was a sprinkling of wiggles on top rather than a coating of the whole top surface, and the whole thing was smaller. The taste and texture were very good, and the fact that the texture was more delicate than Pop-Tarts was a nice change. But 100 calories just wasn't enough in this case.

From the package: “10 pastry crisps 2 per pouch” ... “Snack twice a day and still manage your weight!” ... “Enjoy snacking twice as much with cracker crisps, bars, crackers and pastry crisps from special K.”

This snack was discovered by Jeremy at Market Basket. Review published June 2013.