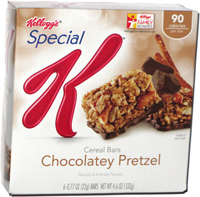 Taste test: This fairly large, fairly light box contained just six individual bars. We opened our first one to find that, unlike many of the other Special K-branded snacks, this appeared to be made from actual Special K cereal. The surface was irregular, consisting of cereal pieces of various sizes, plus pretzel fragments. The bottom of the bar was flat and had a milk chocolate coating. The bar was thick, nearly an inch at its thickest point, and even wider than that. The cereal pieces looked like they were darker than plain Special K cereal, and they were kind of shiny, so there was probably a sugary, possibly chocolatey glaze.

We crunched in to find a nice soft feel with occasional bits of pretzel crunch, with a good sweet (but not too sweet) taste. The mix of chocolate, cereal and pretzel was really quite nice!

From the package: “Yes, I snack ... and so can you! A quick snack, like a Special K® Cereal Bar can give you a lift! Special K Cracker Chips are a great afternoon pick-me-up. Special K® Pastry Crisps help keep your sweet cravings satisfied.”