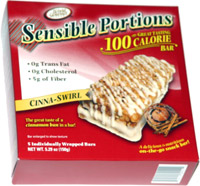 It had a mild cinnamon flavoring not unlike a cinnamon bun or coffee cake. There was some greasiness, but not so much that we couldn't tolerate it, though we would recommend having a cold glass of milk with this bar. Overall, nothing great, but a pretty decent energy bar if you've got a sweet tooth.

This snack was contributed to Taquitos.net by the manufacturer. Review published August 2007.