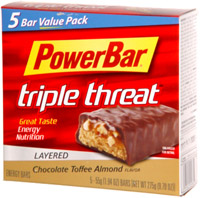 Taste test: This chocolate-coated energy bar had a beige center that only slightly resembled the cut-away view of the bar pictured on the box.

The picture shows some beige stuff occupying about half the height of the bar, then crushed almonds and liquidy toffee or caramel filling the upper half. The actual filling was mostly the beige stuff, with just a sparse, thin layer of almonds at the top. After certain bites, we could see an almond bit in the cross-section of the remaining bar, and on other bites, nothing. The liqudy layer didn't seem to exist at all. The taste was pretty good, with some candy taste and a bit of the gritty energy bar taste, but there was enough grit that I don't think the marketing copy's comparison to a candy bar was apt. Overall, it was too sweet. I'd highly recommend pouring yourself a cold glass of milk to go along with one of these bars to balance out the sweetness and grit.

From the package: “Fuels like a PowerBar® Tastes like a candy bar.™” ... “Great Taste • Energy • Nutrition” ... “Whenever you need a little extra — as a mid-morning snack, a mid-afternoon snack, or a pre-game pick-me-up — PowerBar Triple Threat gives you the taste you want with the nutritious energy you need.”