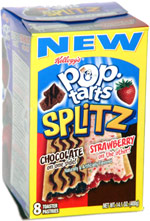 Taste test: This box said that the two flavors (Chocolate and Strawberry) were on opposite sides of these Pop-Tarts, but really they were on opposite ends, with a split of flavor going along the length of the pop-tart.

The chocolate end had squiggles of frosting shaped like the ocean waves that you drew in first grade art class, and the strawberry end had a solid coating of strawberry frosting with some multicolored sprinkles mixed in. Each end had a correspondingly colored and flavored filling.

The box contained four packets of two Pop-Tarts each. For the review, I tried one plain Pop-Tart and one toasted one. The flavor really stood out much more in the toasted one, as it was sweet but kind of bland when not toasted. Melting really brought out the flavor.

From the package: “Chocolate on one side! Strawberry on the other!”