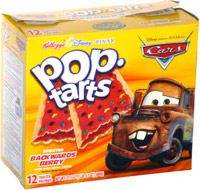 Taste test: This version of Pop-Tarts had a promotional tie-in to the popular movie "Cars" from Disney/Pixar.

Each Pop-Tart had a reddish purple frosting covering most of the top side, but the shape of the frosting was more irregular and covered less total area than was shown in the picture on the box. The frosting had embedded inside it some tiny candy pieces that looked like yellow, green and blue cars and black tires. Those pieces were in many cases broken, and they were scattered oddly around the frosting, which contrasted with the unbroken pieces evenly distributed in the picture. There were also some of those candies loose in the bag. The filling was a purplish mixed berry jelly, less sweet than your typical Pop-Tarts, and the taste was pretty good.

Smell test: Wow, quite nice. They smelled like Pop-Tarts with a mixed berry filling, but somehow that turned out to be a very good smell.

From the package: “While Kellogg's® Pop-Tarts® are fully baked and ready-to-eat right from the pouch, if you prefer them warmed, please follow these instructions:” ... “Due to possible risk of fire, never leave your toasting appliance or microwave unattended.”