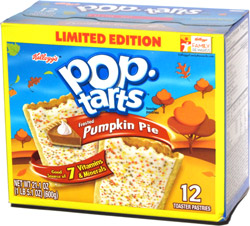 Taste test: This special seasonal flavor from Pop-Tarts had white frosting on the outside, covered with sprinkles colored red, orange, yellow and brown, like fall foliage (or, as Marge Simpson would say, foilage).

The rest of the Pop-Tart tasted like a sweet pie crust, though the ratio of filling to crust was far lower than in a real pumpkin pie. I tried one Pop-Tart toasted and one untoasted, and both were quite good. I checked the ingredients and confirmed that they did contain actual pumpkin. Get a box while they last!

From the package: “Limited Edition” ... “Good Source of 7 Vitamins & Minerals”

This snack was discovered by Jeremy at Aldi Foods. Review published October 2012.