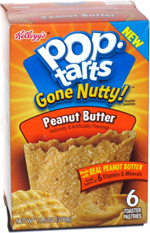 Taste test: This Pop-Tarts variety was introduced along with a Chocolate and Peanut Butter version, and I figured that aside from the presence or lack of chocolate, they'd be pretty similar. That turned out to be quite wrong; this was very different from the other one, and it was also very different from all other Pop-Tarts. The most striking change was the lack of any sort of frosting on the top surface, replaced by a thin coating of sugar granules. Beyond that, the whole thing felt less solid than I've come to expect. It felt like the pastry dough that formed the main structure of the Pop-Tart was softer, but the lack of frosting to provide some structural reinforcement may have contributed as well. For the review, I toasted one piece and ate the other one raw, right out of the packet.

First, the raw one: The taste reminded me a lot of a peanut butter and jelly sandwich, which seemed odd at first, because there was no jelly. But the sweetness from the sugary surface played much of the jelly's role, creating a very similar dynamic. The feel was kind of crumbly thanks to that soft outer structure, so it was more likely to break into pieces and make a mess than typical Pop-Tarts.

The toasted one was quite good as well, and it reminded me of PB&J in its own way. I always toast my PB&J sandwiches, which melts/liquifies the peanut butter when it comes into contact with the warm bread. Toasting the Pop-Tart had the same effect on the peanut butter here, and I liked it.

All in all, these satisfied a peanut butter craving in a very good way, as they delivered a nice helping of soft PB without too much else going on to distract from the experience.

From the package: “BAMmmmmm! A toasty slow-motion explosion of delicious real peanut butter.” ... “if pastry is overheated, frosting/filling can become extremely hot and could cause burns.”

This snack was discovered by Jeremy at Market Basket. Review published December 2013.