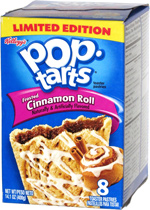 Taste test: This version of Pop-Tarts had a crumblier look than normal Pop-Tarts, with sort of a cross-hatch pattern of white frosting on the top of each one. The picture on the box made it look like there was sort of a spiral (or at least series of round indentations) in the center of the Pop-Tart, in tribute to the actual cinnamon roll shown next it it, but in actuality the spiral was much more subtle. The frosting pattern was also different than what was shown on the box.

The box contained four twin-packs, and for the review, we took one of those and ate one piece plain and the other toasted. The toasted one was quite flavorful, but the generous cinnamon sugar filling was quite hot and stayed hot for a while — hot enough to risk burning the tongue. The untoasted one didn't have all of that melty goodness to taste, but it was still very flavorful and good, with the taste of a cinnamon roll — and no risk of burnt tongue. In both cases, the frosting didn't make a sugary mess on the fingers and face, as it does with any self-respecting actual cinnamon roll.

Smell test: Very nice cinnamon roll smell initially (before toasting). Even better during and after toasting!

This snack was discovered by Jeremy at Target. Review published June 2015.