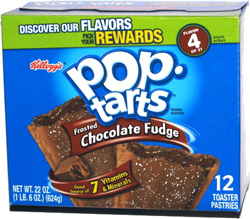 Taste test: This flavor of Pop-Tarts had a very light brown color overall, with a somewhat darker color of brown frosting, including some bits of white.

The box contained 6 packets, each containing two Pop-Tarts. I opened a packet and placed one of the two in the toaster, eating the other one cold while the first one cooked. The cold one was a bit weak on flavor, with a soft crunch and a mild chocolate taste. If you don't have a toaster handy and you're hungry, that might be OK. The toasted one was much better, but the filling retained the heat maybe too well, as I slightly burned my tongue. But the slight burn was probably was worth it for the melty fudge taste. I didn't notice it on the cold one, but the toasted had kind of a graham cracker taste to go with the chocolate. Good stuff.

This snack was discovered by Jeremy at Costco. Review published September 2012.