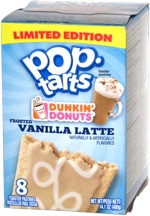 Taste test: This Dunkin' Donuts-themed version of Pop-Tarts was released alongside a Chocolate Mocha one. Keep in mind when reading this review, I don't drink coffee, but I do like the taste of many coffee-flavored non-coffee things.

This kind had a light beige pastry topped by a frosting fairly similar in color to the pastry, with some swirls of white frosting atop that. The filling inside was also very close in color, as I could not even distinguish between the pastry and the filling in a bitten-open cross-section.

From the package: “Limited Edition” ... “To open slip thumb under tab lift gently”