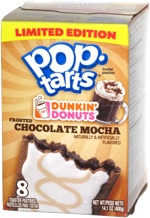 Taste test: I'm reviewing this Dunkin' Donuts co-branded version of Pop-Tarts (as well as the Vanilla Latte flavor) from the point of view of someone who loves the smell of coffee and enjoys various coffee-related foods such as coffee ice cream — but doesn't actually drink coffee. For the review, I tried one Pop-Tart right out of the package, then a second one toasted.

Untoasted: The Pop-Tart had a medium brown pastry base, with white frosting covering most of the top and some wiggles of beige frosting above that. I bit in to find that there was a thin layer of filling in the center, much darker brown than the pastry. I was surprised by how mild the taste was. There was some chocolate and some coffee to taste, but really not a lot of either. I expected a strong mocha taste, and it just wasn't there.

Toasted: OK, now we're getting somewhere! In addition to giving the Pop-Tart a softer, meltier feel, toasting added a whole lot of flavor. There was a good mix of chocolate and coffee, still not super-strong, but about as strong as I expected. It went well with a glass of cold milk. Pretty good!