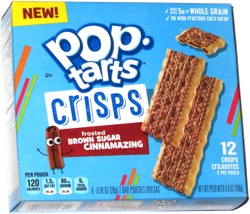 Taste test: As with regular Pop-Tarts, this Crisps version came with two pieces per individual wrapper. The two bar-shaped Crisps combined to be quite a bit less Pop Tart than just one of the standard-size ones. Several years ago, Pop-Tarts had a product called Mini Crisps (in Strawberry and Chocolate versions), which came with many pieces per wrapper, each considerably smaller than this new (non-mini) Crisps kind.

Each piece was about 1-1/2 by 3-1/2 inches and a bit thinner than a standard Pop-Tart, with a pattern of holes going all the way through, mostly covered on top by a sugary glaze, which formed sort of a woven pattern. The bar was light beige in color, with the glaze a slightly darker, lighter in both cases than what was pictured on the box. I bit in to find a slight crunch and a moist feel, thanks to the brown sugar filling, with a nice sweet cinnamon taste overall. The bag contained six of the two-crisp packets, and it was tough to resist eating more than one packet at a time.

This snack was discovered at Star Market (formerly Shaws, and Star Market again before that), Porter Square, Cambridge, Massachusetts. Review published May 2019.