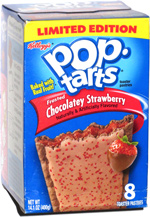 Taste test: These limited-edition Pop-Tarts had a light chocolate-colored pastry base, with light pink frosting on top that had some dark pink (or even purple) bits of something (not sprinkles, but much smaller and in random tiny shapes) stuck to the top.

I'm generally not a fan of mixing fruit and chocolate, but one of the rare exceptions is strawberries. This wasn't the first time that Pop-Tarts combined the two flavors, but last time they did it, with Splitz, they divided the Pop-Tart down the middle, with one side taking the chocolate and the other strawberry. With this one, they put both strawberry and chocolate in every bite.

I first tried an untoasted one and found that the filling was an even darker shade of purple than the non-sprinkles. Unfortunately, there was much less filling than shown on the front of the package. The taste was a bit on the bland side on the first few bites, but it did get richer by eating more, or by starting with a toasted one. This wasn't the best strawberry and chocolate snack, but it was pretty good.

From the package: “Baked with Real Fruit!*” ... “*Filling made with equal to 10% fruit” ... “Naturally & Artificially Flavored” ... “The early bird may get the worm, but who wants worms for breakfast? #poodlewisdom”