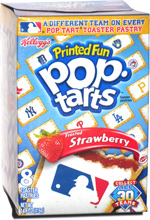 Taste test: This box contained eight Pop-Tarts bearing a Major League Baseball team logo on each, packaged in four twin packs. From the outside of any given foil wrapper, there was no indication of which two teams were inside. (So in a way, they were kind of like packs of baseball cards!)

As expected, they tasted like Frosted Strawberry Pop-Tarts. I tried one raw and one toasted; it was much better toasted. Crisper on the outside, softer on the inside and more flavorful.

It seems like a great party idea to serve Pop-Tarts with your favorite baseball team's logo. But there was just so much wrong about how they did these.

First of all, who would want a random assortment of baseball logos instead of many with their favorite team? Nobody. Let's assume that the team logos are evenly and randomly distributed. If you wanted to get even just eight Pop-Tarts with your team's logo, you'd need to buy 30 boxes, open all of them, and then open 120 twin packs to find the eight — and then you'd have 232 extra, already-opened Pop-Tarts with other teams' logos on them. We hope you're hungry! They could have at least done something fun with the assortment of teams, like putting a team trivia question beneath the logo, and then the answer on the back — but they didn't.

Next problem: Let's compare buying these to buying blank Pop-Tarts, getting a frosting gun and making the logo yourself. Sure, it would take work and require some skills, but the result could be so vasty better. In addition to not having all of those extra Pop-Tarts of the wrong teams, an artistic logo in raised frosting that wasn't so perfect would be far more charming that the printed surfaces, which were made using some sort of edible ink. They seemed very corporate, printed flat in the official colors, complete with trademark symbol.

Finally, even if you did want to serve different team logos at the same party, the logo-printed Pop-Tarts weren't even well suited for that. They rotated some of the logos 90 degrees for some reason (presumably to allow them to be larger) so you could have the logos line up, or the Pop-Tarts line up, but not both.

Maybe the marketing folks at Pop-Tarts realized these flaws in the product, so they were grasping for straws to justify the product when they put the most ridiculous idea of all on the box: "Collect all 30 teams," it said. Collect them? Really? How would that work? I'm a collector of various things, including several that are baseball-related. But collecting out-of-the-wrapper team Pop-Tarts, rather than eating them? What are people supposed to do, store them in shoe boxes, put them into binders? Unless you were to encase them in lucite or something, wouldn't they dry up and crumble, plus attract vermin?

What were they thinking?

From the package: “A different tam on every Poo-Tart® Toaster Pastry” ... “Collect all 30 teams”