Kellogg's To Go Cereal in a Biscuit Oatmeal Raisin 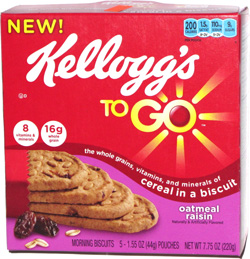 Taste test: When I saw this box on the supermarket shelf, I was kind of frightened by the idea, as it just sounded like it was going to be terrible. Cereal in a biscuit, really? Anyway, I bought it to find out for sure.

The box contained five red foil packets, each containing four biscuits. They looked like elongated cookies, an inch and a half wide and a bit under 4 inches long, and they were fairly thin, with rounded ends, a slight ridge around the top edge and a pattern of (sort of) oat-shaped bumps on top. The bars were generally medium beige in color, but there was some variation, including some dark areas that were presumably the raisins.

From the package: “the whole grains, vitamins, and minerals of cereal in a biscuit” ... “Now, a great start to your busy day is as simple as grabbing a pack of Kellogg's To Go™ morning biscuits. They're a delicious way to get you going, wherever your day takes you. The whole grains, vitamins & minerals of breakfast cereal … and no spoon required!”

This snack was discovered by Jeremy at Market Basket. Review published August 2015.