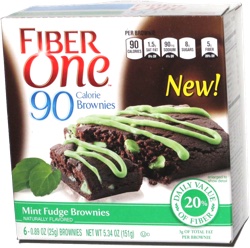 Taste test: The six individually wrapped brownies in this box were just about square in shape (though they came in a rectangular wrappers), with a nice brown color and a cracked brownie look on top, plus some light green squiggles of frosting (though the squiggles were thinner and less plentiful than shown in the picture). Each one was about three-quarters of an inch thick at the thickest point.

I bit in to find a nice soft feel, about middling in density, but without and sort of brownie crunchiness on the top. The chocolate and mint were both pretty good, but the mint did seem a bit mediciney at times. Best consumed with milk.

Smell test: Nice chocolate mint smell, almost like Thin Mints (but not quite).

From the package: “20% daily value of fiber” ... “Go ahead ... it's 90 Calories. A healthy lifestyle shouldn't mean a compromise on great taste. Fiber One 90 Calories Brownies are a moist, rich, chocolatey brownie with chips and a luscious drizzled topping. Each brownie is 90 calories and 20% of the Daily Value of fiber.”

This snack was discovered by Jeremy at Market Basket. Review published January 2016.