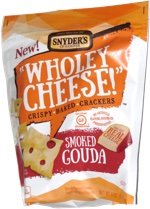 Taste test: For Snyder's of Hanover's entry into the cheese cracker game dominated by Cheez-Its, they decided to change the rules. The biggest change — and the whole idea behind this Wholey Cheese name — was to add holes to the crackers. It certainly gave them a distinct look! (The look was a bit incongruous in the case of this flavor, since Gouda does not have holes like Swiss cheese, but there is another flavor with Swiss that we'll try soon.) They also changed the main ingredient, as these were potato-baed, rather than mostly wheat. Each piece was roughly square, kind of like a Cheez-It, but slightly bigger, hollow and puffier than Cheez-Its. They had a pale yellow color, with some occasional slightly darker spots.

I crunched in to find that the outside shell was very thin and had a nice light, crispy crunch, and there was quite a lot of tasty Gouda flavor. The light feel made it easy to eat lots of them in rapid succession. Very good!

From the package: “I'm airy, crispy & baked! I'm made with real cheese and better ingredients” ... “I'm 28% less fat than the leading brand of cheese cracker”

This snack was discovered by Jeremy at Market Basket. Review published March 2017.