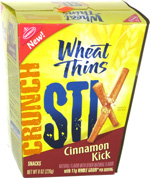 Taste test: Each of the many cracker sticks in this box was about three inches long, with a round profile, various shades of beige, and a good helping of cinnamon sugar visible on the surface.

The sticks were crunchy and tasted mostly like honey wheat pretzels at first, with just a bit of cinnamon. As I ate more, the cinnamon became more noticeable. However, I was expecting some major cayenne pepper kick, as other "hot cinnamon" snacks tend to have, and there wasn't much of it. I checked the ingredients to find that the last ingredient was Dried Jalapeño Juice, so I guess that was supposed to be the kick. There was some minor heat in the aftertaste, but barely enough to really call it a kick. To summarize: Good crunch, not enough cinnamon, not enough kick.

From the package: “For easy snacking, bend flaps down and squeeze the box open”