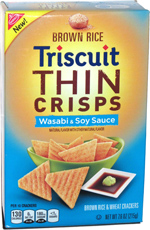 Taste test: We've resisted going on a binge and buying all of the Triscuit varieties, because there are just so many, but this, with its promise of wasabi, was just too tempting to resist. We checked the ingredients and found that in addition to the promised brown rice, it contained wheat as well, much like your conventional Triscuits. The crackers had equilateral triangle shapes, but otherwise their surfaces highly resembled the woven wheat look of standard Triscuits.

We crunched in to find that the resemblance didn't extend to the bland taste of Triscuits — these started out with a serious kick of wasabi, along with some some ginger and soy sauce. (The package didn't mention ginger specifically, but is sure tasted like there was some.) It was a similar mix of tastes to the excellent Lay's Wasabi Ginger potato chips. Our only major criticism of those Lay's was that there wasn't enough wasabi, but we can't make the same complaint here — these had quite a bit more wasabi kick. Not for the faint of heart. Great stuff!

From the package: “Engage your senses with the captivating flavors of Brown Rice Triscuit Thin Crisps. These brown rice and wheat crackers are enticingly crispy with a stimulating crunch — they will take you on an amazing taste adventure with every snack-worthy bite!”