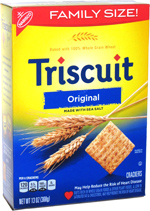 Taste test: Triscuits are a snack that's been around forever, but we recently realized that despite having reviewed one odd variety (a triangular version with four different cheeses), we had never evaluated the original. When we hit up the cracker aisle, we were astounded to find 22 distinct varieties of Triscuits. As tempting as it was to stock up on all sorts of flavors, we bought just this one. (But we'll only be able to resist the Wasabi & Soy version for so long!)

The front of the box boasted of the inclusion of sea salt, which wasn't something we had noticed before. If Triscuits did indeed have sea salt all along, we doubt it's something they even bothered to point out way back before sea salt became the trendy salt. The crackers (or cookies? or biscuits? or something else?) were square and measured about an inch and three-quarters on each side, and they looked like something that came from basket-weaving class. They were also fairly thick. We crunched in to find a dense, soft feel with many strands of stuff all crunching at once. We could taste a lot of wheat, and it did taste like they used sea salt. You could put all kinds of different toppings on top, and apparently many people do this. But even with just the box of Triscuits on hand, there was still enough flavor that to avoid blandness, as long as you like the taste of slightly salty wheat and don't eat too many pieces — and a single piece is filling enough that you might not have to.

Some of our snackers did point out that Wheat Thins taste better. If you were to find these bland, you could either work on toppings (but it's work!) or even better, start to work your way through the flavors of the 22 varieties.

One more surprise here was that the original had only three ingredients!