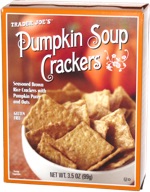 Taste test: These rectangular (but nearly square) crackers had a beige color, with flat shapes but bumpy surfaces. They really didn't look like much, or smell like much, and that's probably why I was so surprised by what happened when I crunched in.

The crunch was not like a wheat cracker, but really like a rice cracker — which I hadn't realized from the name that these actually were, but was indeed indicated on the package — and my tongue could feel a powder on the surface (that I hadn't seen) and it added a subtle sweetness with a hint of pumpkin. Very tasty, quite nice!

Smell test: I could smell something, but not pumpkin.

From the package: “Seasoned Brown Rice Crackers with Pumpkin Puree and Oats” ... “traditionally, crackers are put into or on top of soup, Not the other way around. These Pumpkin Soup Crackers have flipped the script on tradition, taking the warm, earthy flavors of pumpkin soup and re-imagining them in cracker form. Real pumpkin puree is blended into a crunchy brown rice & oak cracker base, then seasoned with spices to create a savory snack that can be even straight out of hand, no bowl (or spoon, for that matter) required.”

This snack was discovered by Jeremy at Trader Joe's. Review published October 2016.