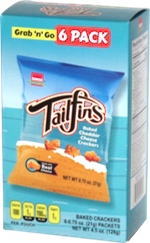 Taste test: These snacks looked like an obvious Goldfish knockoff, but it also appeared that they did Goldfish one better, with three fish shapes instead of one — and far more interesting shapes, at that.

The box contained six individual 100-calorie packs, and it turns out that you can get a lot of small crackers for 100 calories, because there were more pieces in each packet than I had the patience to count. Each cracker had a light orange, Goldfish-like color and was flat on one side and had some detail on the other. One looked kind of like a whale, another kind of a puffy fish of some sort, and the last, sort of like a starfish, but with a smiling face. Oddly, two of the three kinds were mirror images of the ones pictured on the box.

I crunched in to find a light crunch and a good taste, mildly cheddary initially and then cheesier and cheesier as I ate more pieces. An impressive cheese kick, pretty good.

This snack was discovered by Jeremy at Dollar Tree. Review published December 2020.