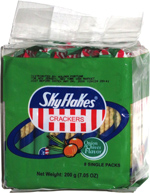 Taste test: After trying the original and garlic flavors of SkyFlakes, both of which had very pale appearances and less flavor than we'd generally like from our crackers, this one seemed like the last chance for SkyFlakes to deliver.

We opened one of the eight separate packets inside this wrapper to see that the crackers had a nice color change from the other two — some shades of beige here and there (still light in the grand scheme of crackers, but darker than the other ones), plus some bits of green and brown embedded inside. As with the other kinds, there were three large crackers in each packet, perforated to be broken into three smaller crackers each. We crunched in to find that there was also more flavor than the others, with a mild mix of chives and onion. There was still no flavor explosion, but it was the tastiest of the three kinds. OK on its own, but far better with a slice of cheese on top.

Smell test: Mild chives and onions smell. Not much, but nice.