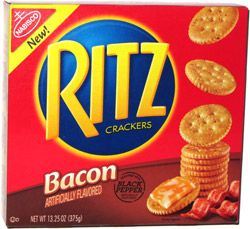 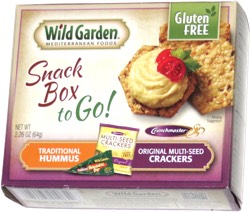 The crackers pictured on the box had some darkish bits of something on their surfaces (presumably the artificial bacon), but there was way less of that on the actual crackers. I crunched in to find a pretty good taste, not really like bacon, but still smoky and tasty. It was a good flavor. However, there was enough of that simulated bacon-like flavor that the buttery taste that makes Ritz so good (see my tribute above!) was not really in evidence. So they replaced a truly great cracker with a perfectly good flavored one. And not even one that really tasted like bacon. I would not take that trade any day. We'll stick with the original Ritz.

From the package: “artificially flavored”