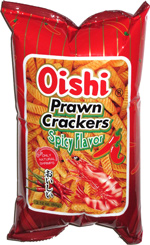 Taste test: These prawn crackers were shaped kind of like crinkle-cut fries, though the crinkles on the actual fries were more subtle than the ones pictured on the front of the bag.

We crunched in to find a light crunch, middling density and good crispness, with a kick of fairly strong heat upon crunching in. The heat calmed down after that, leaving way for the shrimp to dominate, and there was a lot of flavor from both the shrimp and the various starches (which included wheat, tapioca, corn and potato), though the shrimp was stronger than the grains. The heat did return a bit in the aftertaste.

We shared these with lots of snackers after getting together for a morning run, and some of them were a bit skeptical of any seafood snacks, but even many of those folks enjoyed the taste.

From the package: “Only natural shrimps” ... “Fresh Shrimps: Live shrimps are harvested and frozen to lock-in freshness until the day it is made into your favorite prawn crackers.”