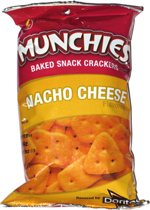 Taste test: These cheese crackers appeared at first to be Frito-Lay's answer to Cheez-Its, but as soon as we opened the bag, we found one major difference: variety of shapes. Whereas the standard Cheez-Its are all squares, this bag contained no squares, instead providing orange-colored crackers in three unusual shapes. If not unusual, at least difficult to describe: sort-of triangles, with curved edges bulging outward instead of just flat sides, plus three holes; not-quite rectangles, with two straight edges, but curved, bulging-outward edges on the two shorts sides, plus two holes; and a third shape that's even harder to describe, sort of like a rectangle, with rounded corned and the edges curving inward, plus five holes. According to the bag, the flavor was supposed to be based on Doritos, presumably Nacho Cheese Doritos.

We crunched in to find that they didn't really taste really anything like Doritos — nor much like Cheez-Its. They had their own flavor different than either of those, very cheesy and quite good, and slightly tangy. In terms of texture, they were a lot closer to Cheez-Its than Doritos, but they didn't closely match the Cheez-Its texture. These were a bit thicker, crisper and less flaky. For texture, better than Cheez-Its; for flavor, just different.

Smell test: Sort of like a nacho cheese dip.

From the package: “flavored by Doritos® brand”