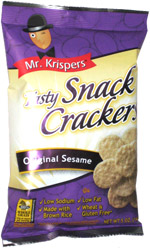 Taste test: These rice crackers were smaller than the other Mr.

Krispers varieries, about an inch in diameter, and they were round rather than oval-shaped. What they had in common with the other Mr. Krispers was that they tasted quite good. They were very crisp and had a nice light crunch, and they were loaded with a very tasty sesame flavor, with a slight bit of saltiness. Yum.

From the package: “Mr. Krispers are made from California brown rice, which may help you add fiber to your diet. Brown rice also gives them their extre 'Krispyness'!”

This snack was contributed to Taquitos.net by the manufacturer. Review published November 2007.