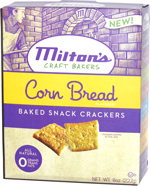 Taste test: These crackers had somewhat unusual shapes. They were close to rectangular, but not rectangles, with two of the edges curved, as if someone had made a giant O-shaped cracker (with a hollow center) and then cut into pieces along the radius of the circle. (Oddly, the ones pictured on the package had a different shape.) The color was similar to cornbread.

We crunched in to find a nice light crunch and a whole lot of corn taste. As a big fan of cornbread, that's the taste that I was hoping for, and these came close but didn't quite hit it. The initial case was kind of like a Ritz cracker, with a definite hit of cornbread in the aftertaste. Very tasty!

From the package: “crackers shown actual size” ... “At Milton's Baking Company, we are proud to be different. Starting out as a local bakery-restaurant in San Diego, California, we quickly became known as a little company with big ideas of baking. We don't believe that healthy food has to be bland and boring.” ... “Product of Canada” ... “Suitable for Vegetarian Diets”