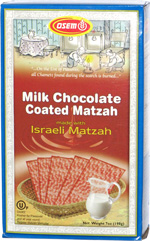 Taste test: This box contained sheets of matzo that were just a big as the box, each covered on both sides with a fairly generous coating of milk chocolate.

I'm not a huge fan of matzo (eating lots of it over the course of a week proved to be energy-depleting) and it turned out that the biggest problem with chocolate-covered matzo is the matzo. The chocolate was quite good, and to the degree that I could ignore the matzo, I had no complaints. There were times in eating this that I could entirely ignore the matzo, because in the course of breaking up the sheets into smaller pieces, some large sheets of just chocolate broke off. Those were really good. The pieces that included both matzo and chocolate were decent because they still had chocolate, but if I had a chance to pick anything at all to coat in chocolate, I would not choose matzo.

From the package: “made with Israeli Matzah” ... “On the Eve of Passover, all Chametz found during the search is burned ...”