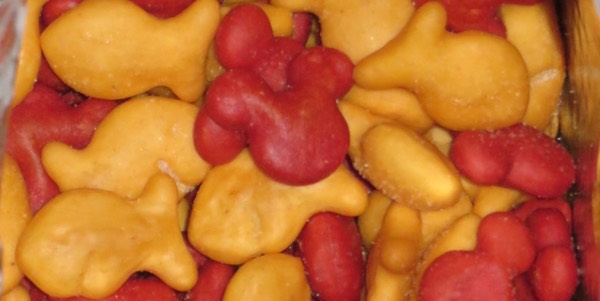 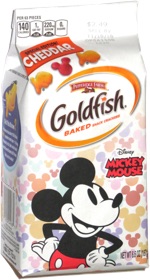 Taste test: This special edition of Goldfish contained special red, Mickey-shaped crackers, along with the original orange, fish-shaped ones.

The Mickey ones were a bit smaller than the fish.

It's been years since I've reviewed any new kinds of Goldfish, while trying many new kinds of Cheez-Its in that time, and these seemed much less cheddary than I remember, and definitely less cheddary than Cheez-Its. There didn't seem to be any difference in taste between the red ones and the orange ones. I also didn't remember that Goldfish came in such lousy packaging. It was tough to get the top open, and when I did, I couldn't avoid ripping the multi-layer bag apart.

Smell test: Really nice! Whatever spices they used in addition to the cheddar made for a great combination.

From the package: “Colors sourced from plants” ... “Did You Know? Americans enjoy about 150 billion Goldfish® crackers each year — if strung from head to tail, that could reach around the world nearly 60 times.” ... “The ingredients from sugar and canola in this product come from genetically modified crops.” ... “Do not purchase it bag is open or torn.”