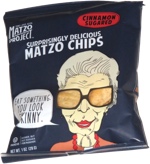 Taste test: These chips had the same diamond shapes as the Salted Matzo Chips, with a light cinnamon coating on the surfaces.

We crunched in to find a very mild cinnamon sugar flavor, far weaker than some other cinnamon sugar snacks that really replicate the great taste of cinnamon toast. In this case, it proved a tough task to overcome the blandness of the underlying matzo, so the taste was mostly matzo and just a bit of cinnamon sugar. Decent.

From the package: “Surprisingly delicious” ... “Est. 5775” ... “Eat something. You look skinny.” ... “Kosher, but not Kosher for Passover.” ... “You wouldn't eat pita chips with salsa tortilla chips with goat cheese or water crackers with hummus. But guess what? You can eat a matzo chip with all three” ... “Proudly made in USA”

This snack was discovered by Jeremy at Eataly Boston. Review published .