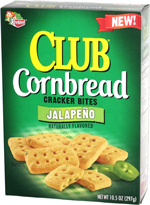 Taste test: These crackers were smallish, at about an inch and half long and one inch wide, with a 2x4 grid of fairly large holes that went all the way through. They were fairly thick as crackers go.

I crunched in to find a crumbly crunch but not really a cornbread flavor (and I love cornbread). Shortly after that, I could definitely taste the jalapeño in the aftertaste. Then after that, as the heat receded briefly, I really could taste cornbread, so that was nice. The heat came back stronger after that, while the cornbread taste went away. At times, the gritty texture did somewhat resemble cornbread. As with some other snacks that tried to duplicate the taste of cornbread (such as ones from Funley's and Milton's), it was not a perfect success at that, but still a pretty good taste.

Smell test: Not much, really could smell any cornbread or jalapeño.

From the package: “A new take on snacking” ... “Authentic corn bread flavor in a delicious bite-sized cracker”