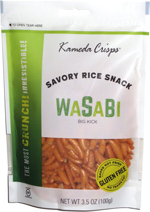 Taste test: This smallish bag contained small, narrow pieces, each light orange in color and sort of crescent moon-shaped. The feel looked to be very airy based on the foam-like interiors revealed in some broken ones.

However, when I crunched in, I was surprised by how crunchy they were, as the feel was crisp by fairly solid. I was also surprised that I couldn't taste any wasabi (at least at first) as the initial flavor was just like Japanese rice crackers. After I ate several pieces, there was strong hint of wasabi with an associated mild kick, plus a wasabi aftertaste, but that initial intensity that we usually get from wasabi snacks was absent.

From the package: “Produced and Packed in the USA with Japanese rice crackers.”