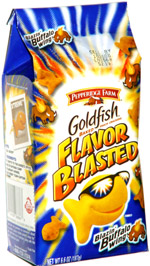 Taste test: This version of Goldfish had the same orange shape and same base color as regular goldflish, but most of the pieces had some isolated splotches of a darker red.

There was a bit of a spicy, tasty kick at first, sort of similar to a Buffalo wing taste, but maybe more of a regular hot sauce tatste, though also cheesy. The aftertaste was more like regular Goldfish. Pretty good, but if the flavor had been stronger, it would have been better. An interesting note is that "Blazin' Buffalo Wing" is the exact name that Pringles gave to its Buffalo wing flavor, identical to this name, right down to the apostrophe. This bag had illustrations of buffalo (the animal, not the city) on fire, whereas the Pringles can did not.

From the package: “No buffalo were harmed in the making of these crackers!” ... “Do not purchase if bag is open or torn”

This snack was discovered by Jeremy at Market Basket. Review published September 2008.