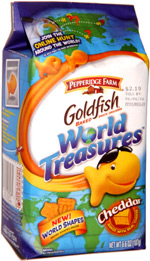 Taste test: This bag contained mostly Goldfish in the usual goldfish shape, but about a fifth of the pieces had the same color and cheddar flavor but very different shapes — specifically they were supposed to resemble, the Leaning Tower of Pisa, the Taj Mahal, the Arc de Triomphe and the Clock Tower at the Palace of Westminster (sometimes called Big Ben, though technically that's just the clock).

The taste was just like regular Goldfish. The different shapes added a bit of fun to the eating process, but many of our tasters were disappointed when they poured out a handful and didn't get a single non-Goldfish shape. Pepperidge Farm probably should have included more of them in the bag.

From the package: “New! World Shapes” ... “Baked with Real Cheese” ... “Swimmington, traveler extrordinaire, has lost his suitcase filled with world treasures ... and it's up to you to get them back!” ... Plus there was a very confusing map on the back of the bag, which seemed to jumble together various features of different continents and then put them in the wrong places.