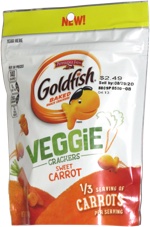 Taste test: This new version of Goldfish promised to include actual carrot among its ingredients, but the crackers looked mostly like the regular ones, with an orange color and familiar shape — the fish-shaped ones, anyway. The others were shaped like carrots, though with eyes and a smiling mouth that I've never seen on the actual vegetable.

The big change here was that despite the orange color, there wasn't any cheese. I crunched in to find a nice crisp crunch and a good taste, which surprisingly wasn't all that different from the Goldfish that have cheese. Basically, it tasted like a salted wheat cracker, with maybe some additional flavor from the carrot, and it turned out that wasn't radically different from one with cheese. If I really thought about it, I guess I could notice the lack of cheese, but if nobody had told me that there was none, I might not have noticed.

One big change here was that they used a much different kind of bag than the usual paper/foil ones, and this bag included a Ziploc-style closure mechanism. Unfortunately, that mechanism was terrible — it just wouldn't lock without trying again and again and again. I've never seen a zipper bag that took so much effort.