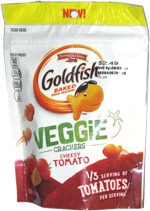 Taste test: This version of Goldfish followed much the same concept as the Sweet Carrot ones, with half of the pieces taking on a tomato shape (complete with face, though it actually looked more like a pumpkin than a tomato), while the rest kept the usual fish shape. This time they included cheese instead of omitting it as they did with the carrot ones.

They tasted and felt mostly like regular Goldfish, but there was a bit of tomato flavor mixed in too. Not bad, but there was less tomato than I expected. Ho hum.

Speaking of less tomato than expected, the really fascinating thing about this product was the nutrition claims. They were billed as Veggie Crackers, so that's better than non-veggie Goldfish — right? The front of the bag boasted "1/3 serving of tomatoes per serving" (that's not a typo, they are indeed citing servings/serving) and the back of the bag's Nutrition Facts defined a serving as 57 Goldfish.

Searching the USDA's 144-page Dietary Guidelines for a definition of a "serving of tomatoes" yielded much nebulousness. They didn't define a serving of tomatoes, but in ranking various foods' potassium levels, they pegged one "portion" as 1/4 cup of tomato paste (54 calories), 1/2 cup tomato puree (48 calories) or 1 cup of tomato juice (41 calories). Defining Portion Size, they said, "the amount considered to be a portion is subjective and varies." The National Heart, Lung and Blood Institute said, "Many foods that come as a single portion actually contain multiple servings." To further confuse things, the FDA tracks Reference Amounts Customarily Consumed.

The most definitive tomato serving definition that I could find came not from the government but from Meredith Magazines' eatingwell.com, which said a serving is "1 cup chopped or sliced, raw, canned or cooked tomato (about 32 calories) or 2 small raw whole tomatoes (about 33 calories) or 20 cherry tomatoes (about 61 calories)."

Regardless of what a serving of tomatoes is, let's take the bag's claims to be generally implying that eating one serving of tomatoes would be better for you than not doing it, and that you can use this product for the purpose of doing that. Applying math to the Goldfish/serving and servings/serving numbers provided, that means that eating 171 of these Goldfish pieces is like eating a serving of tomato — and since a portion could be multiple servings, we could be talking in excess of 300 Goldfish to get a portion.

From the perspective of a Chief Snacks Officer, even the 57 Goldfish serving size seems like a heck of a lot more than most people would typically tend to eat at once, let alone these absurd numbers that I've calculated. So if you want more tomato in your diet, there are many tomato-rich processed foods to buy, and also many stores have produce departments that sell actual tomatoes! If you like to eat Goldfish, buy some and eat them, but choosing this kind rather than standard ones doesn't seem like it would make you into a legitimate eater of vegetables.

From the package: “1/3 serving of tomatoes per serving” ... “Tomato goodness baked in with the great taste you expect from Goldfish®! ... what's not to love?” ... “The ingredients from corn and canola in this product come from genetically modified crops.”